If you’re looking for a melodica from the company that invented the instrument as we know and love it today, read on. We’ll go over how Hohner melodicas came to be and what instruments they offer to help you figure out which one is the right choice for you. You’ll learn a bit about Hohner melodica’s history, examples, and reviews of some of their most popular models.

A brief history of Hohner melodicas

Why on earth a picture of a harmonica at the top? Well, Hohner is possibly primarily known as a harmonica producer. Also, both the harmonica and melodica are free-reed instruments. So, we’ll give Hohner their harmonica props.

Like all good origin stories, the melodica’s history is steeped in a little bit of controversy. While it’s very clear that Hohner, a musical instrument manufacturer based in Germany, is a leader and a trailblazer in the musical development of this amazing instrument, there is some question regarding exactly who produced the very first melodica as we know it.

The modern melodica was produced in the 1950s, and most likely later in that decade. 1958 seems to be the year that most experts agree on as the birth year of the modern melodica. However, both Hohner and an Italian company called Borel produced instruments at that same time. It may come down to the exact month, or even day, that the first melodica was released to find the winner. We’re fine being happy that we have an interesting story that’s led to the development of such an amazing instrument.

One rather important distinction between the two early instruments is the keyboard. Borel’s La Clavietta was produced with the usual piano-style keyboard that we typically see on melodicas today. Interestingly, Hohner’s version was made with the button style keys that have since fallen out of favor with most players. You can still find some lower-end versions available with button style keys. However, for the most part, serious instrument makers feature a keyboard that is basically a much smaller piano.

Why make the melodica in the first place?

Hohner’s website makes the company’s goals clear saying, “the melodica combines the advantages of a wind instrument with the versatility of a piano key accordion.” It’s also clear that having a smaller instrument that can go from a tabletop or lap to being easily carried around on stage was a crucial aspect of the melodica’s development.

Another important aspect was education. And this is actually a recurring theme among all melodica makers. They all state that creating an instrument that can fulfill the needs of students learning both woodwind instruments and piano was an important goal. So, it seems that the melodica was, in fact, at least largely intended as a learning instrument.

However, that distinction did not last long. As soon as people started to hear the possibilities with this versatile instrument, its popularity exploded.

The Hohner melodica in the 60s and 70s

Hohner quickly realized that piano-style keyboards were the way to go. In the early ‘60s, they began to feature their melodicas with the same style keyboard that Borel had created. This made sense for a number of reasons. If a student was going to use the melodica to learn basic piano, then why not make the keyboard as similar as possible? Also, if a serious, professional musician were to take the instrument seriously as well, moving away from the button style keyboard made sense.

The melodica remained a popular instrument with students and some musicians in specific genres like folk and jazz. But, as rock and dance music took off from the ‘70s and into the ‘80s and early ‘90s, the popularity of the melodica waned. With one very stark exception, reggae.

Augustus Pablo and the Hohner Piano 26

Augustus Pablo was a reggae pioneer who developed a sound that no one had before. He did this largely through the use of his Hohner Piano 26 melodica. It became an expressive extension of his musical self. And with it, he set off a melodica craze in Jamaica.

Throughout the ‘70s and somewhat into the ‘80s and ‘90s, Pablo created masterpieces of mood and melody that fascinated his fans. Definitely check him out.

A resurgence of popularity in the 90s and beyond

With reggae and jazz growing more popular with larger crowds, so did the popularity of the melodica. While no one came close to what Augustus Pablo did in reggae, the melodica started to become more popular with jazz musicians and folk bands as well. Hohner continued to produce high-quality instruments and was seen as one of the premier labels, even though they were going through some trouble as a company.

In the late 1990s, they were brought back from a slump by K.H.S., a musical instrument company based out of Asia. In the early part of the 21st century, Hohner began to turn a profit again.

The quality of Hohner melodicas

Throughout the early history of its melodica production, Hohner has been one of the leaders in terms of quality. While they’ve offered different options for varying levels of skill and needs, as a whole, Hohner melodicas have been highly regarded as well-built musical instruments.

As you move into the professional level melodicas, Hohner stands out even more. They have consistently been one of a very small handful of companies making excellent melodicas over a number of decades. Yamaha and Suzuki have also created some wonderful instruments.

Hohner lists three main classes of melodicas on their website these days. You’ll find the Student Series, the Force Series, and the Airboards. Let’s take a look at each of the series.

The Student Series is Hohner’s entry level and advanced beginner level series of melodicas. Depending on your budget, these can be a good entry point to playing melodica. The low end isn’t quite as low as a Cahaya, Eastar, or amoon; however, you may be happier with the build quality of a Hohner.

Since the production has moved from Germany to countries in Asia, the build quality has gone down a bit, so you should be aware of that. They are still a great product, though. Just make sure to set your expectations when you purchase a lower-end Hohner. If budget is your primary consideration, you may want to take a look at one of those budget brands mentioned above.

The Force Melodica Series is listed as being specifically designed for melodica players in bands, to keep up with loud, live environments. Hohner states that it’s great for rock settings and modern pop as its tightly constructed body allows for more volume and greater directed tone without increasing the force of your breath.

They tend to be well rated by reviewers online, and the overall look and feel of these melodicas seems better than the Student Series.

The Airboard Series appears to have been created specifically to fill a niche for reggae artists and fans. If having a reliable melodica that fits your style and your aesthetic is your primary concern, and this fits you well, go for it. Just realize that the line isn’t really offering more than slick styling and a very specific vibe.

In terms of actual design differences, there is a new mouthpiece and tube. Some people love it, and some people replace it right away. Read reviews to get a better idea of this. The models in this series normally come in both 32 and 37 key options. One thing to note is that there is a Junior model that some kids might find really appealing. 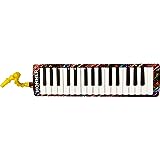 Upkeep with a Hohner melodica

One thing to keep in mind as you shop for the right melodica for your situation is that all melodicas will need to be tuned. You will either have to learn how to tune your melodica yourself or find a good music store to take your instrument to now and then. I highly recommend that you learn to do this yourself. You’ll save money; you’ll save time, and you’ll have much more intimate knowledge of your melodica.

It’s also very important to keep your melodica clean. Do your best to keep it in a case of some kind when you’re not playing it to help keep dust and dirt from getting into the keys and even inside the body. Wipe down the body from time to time as well with warm water. If it gets really dusty or dirty, use very mild soap and a soft cloth to clean it.

Depending on how often you play your melodica, it can be a good idea to take it down to your local music shop and have them do a thorough cleaning and adjustment on it. They can take it apart and clean the reeds, adjust the tuning, and make sure all is well with your investment.

The main thing with any musical instrument is to have fun. Melodicas provide tons of opportunity for this since they are immensely portable and so easy to pick up and play.

Hohner has built a trusted name for themselves in the world of melodicas. Whether you’re playing a German-made vintage Hohner melodica or a brand new Student model, you can be sure that you have a great tool to learn music or create something awesome with your bandmates.